If you’re looking for a couple of entertaining, genuine and fun people, look no further then Kevin and Shan from Dragon Claw Games.  It was an absolute pleasure to interview them in our latest Community Spotlight where they opened up about their start on YouTube and gave some shoutouts to their favorite arcades.

Kevin: I’m from Houston originally and have lived here nearly my entire life! I do enjoy playing games on my PC with Shan whenever we aren’t playing together at the arcade. Some of our favorite games we play together include Ragnarok Online (How I met Shan actually), Monster Hunter, and World of Warcraft (FOR THE HORDE!!!). I used to be such a homebody before we started our channel and just stayed home all day being bored! Traveling to new places with Shan is something I am enjoying so much in life right now!

Shan: I’m not from Texas at all! I’m actually from a small town north of Pittsburgh PA, but moved to Houston about 8 years ago. Talk about culture shock! I went to college for IT and really wanted to be a web designer, but that didn’t quite play out. I’ve also been doing digital art on and off for the last 18 years! My favorite game franchise is Monster Hunter! I collect the figures and even have a bunch of really cool Monster Hunter shirts you see on the videos! I love travelling to new places, especially when there’s new foods to try. I’m really big into cooking; it’s pretty much all I do outside of editing videos and working. I’ve been told it even tastes good!

Kevin: My sister and I used to go play arcade games at the Katy Mills Mall at the Jillian’s Arcade WAY back in the day and we loved to win as many tickets as we could! One of our favorite games that we played together that I wholeheartedly love was Super Hoop La to win lots of tickets. The game plays much like a UFO Catcher where you can move it over and up only once. You have to use your skills to line up a hoop, like a claw machine, to fall over a cylinder with a ticket value over them. We used to always go big for the 200 tickets and get so excited to win even once!

Shan: My parents were on a bowling league when I was around 10-13 years old. We’d go with them on Saturdays, and they’d give my sister and I 10 bucks to play in the arcade. We’d get tokens and beat up some games, like spider stomping (remember that ancient game!?) and Skee-Ball! I also LOVED playing RoadBlasters! I remember saving up my tickets for a mini gumball machine, which was pretty awesome. I stopped going to arcades through high school and college, but once I moved to Houston, Kevin and I were frequent flyers to Dave and Busters and Main Event, and I learned how to play all the new games quite quick! We even went on quite a few dates at the arcade before we got married. Nothing wins a girl over more than winning enough tickets for whatever she wants! 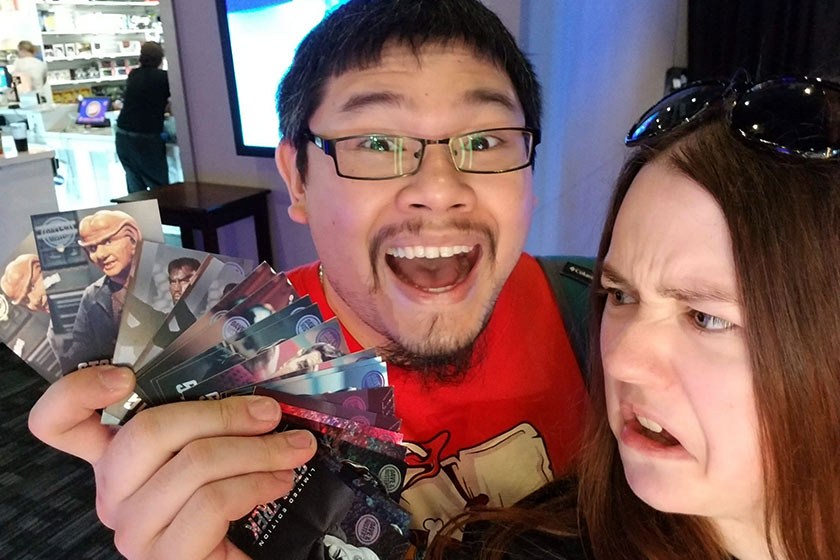 Kevin: I love answering this question! I came across Plush Time Wins’ channel and got hooked immediately watching their videos and we started going to the arcade more often. Shan and I were at the iT’z arcade playing the Moving Castle Claw Machine and on the other side of us, someone was struggling to win a prize for his girlfriend. He saw I had about two or three prizes already in my arms and asked how do I win from this game? I explained how the machine works, then he swiped his card, moved the claw into position, and I told him when to drop the claw! He won a pink flamingo and told me “Wow! That was amazing! I spent like $30 on this machine and never won. You told me how to play once and I got it in one try! Dude, you should be on YouTube!”. That is how I got the idea to finally start our channel! Thank you random guy!

Shan: Uh… because Kevin wanted to make a channel. That’s it! No, wait, that was a serious answer, though. I honestly didn’t want to be on Youtube at first. It seemed like SUCH a daunting task – okay, it still is! – and we were already so busy with our jobs, everything told me “no no no!” But he convinced me, and I’m so very thankful I gave it a try, because this is awesome! Kevin had all the great ideas and the drive to be successful, but he needed someone with skills in digital media, which I knew quite well… once we partnered up, we both put our heads together and created DCG! I remember designing our first logo while Kevin researched the intricacies of Youtube. While I slowly tried to figure out Premiere and learned to edit videos, Kevin was networking with other Youtubers, seeking advice and striving to grow. I remember recording our first video thinking “We are SO weird walking around with a camera!”, but as the days, weeks, and months went on, it became a very important part of our lives. If I could go back in time and kick my past self for ever doubting it, you know I would! With feeling!

Kevin: I truly love test of skill games! Speed of Light, Qubes, Crossy Road, and UFO Catchers! If I had to choose between all of these, I would have to say I like the UFO Catchers the most! You can customize them as much as you want! They are so versatile and are only limited to what you can think of! I love them so much, we bought one for ourselves!

Shan: I love any game with timing. Monster Drop (Chaos!), Slam-A-Winner, Crazy Tower and Spin-N-Win are my current favorites. I’d play Color Match if we could find it anywhere in Houston, but sadly we don’t have one! Claw machines are always fun with UFO catchers taking a special place in my heart. I especially love coin pushers… there’s just something about hearing those coins fall that’s so…. mesmerizing…

Do you have a favorite arcade (or a local arcade you want to give a shout out)?

Our favorite arcade is, hands down, Speedy’s Fast Track in Houston – we recorded our very first video there, and we make it a point to take EVERYONE who visits Houston there. Where else can you buy ice cream with tickets? They even have a WHEEL you can spin with tickets where you can win free mini golf, go-karts, play credits, etc. They always have a great blend of new games and retro games, and it’s very affordable. The owners also own Bay Area Raceway and Houston Go Kart Raceway, all of which built with the same blend of old and new games and awesome prizes! They also include some homemade arcade games – especially Speedy’s, which contains a homemade basketball game and a REALLY difficult timing game called Lightning Tower where you have to match up lights to three different towers three times in a row to win the jackpot!

Of course! We follow almost every arcade Youtuber, with our most watched being (in no particular order – we don’t play favorites!) Plush Time Wins, Kawaii Arcade Masters and The Crane Couple, and a bunch of Youtubers who started around the same time as us – NolaFam Arcade, TheArcadeDad, and plenty more! 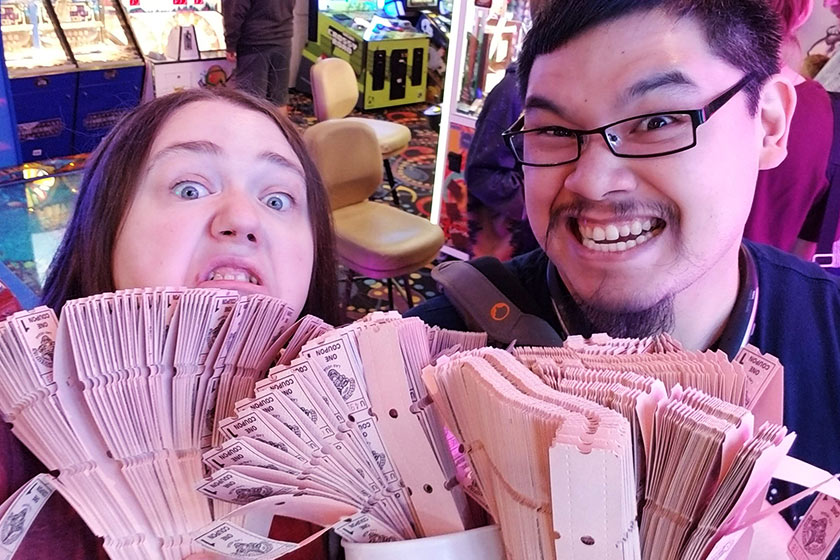 More bang for your buck! Some arcades charge much more per play than was designed (For example, Teamplay’s Fishbowl Frenzy was intended to be a very affordable game, but many arcades are charging nearly 2 bucks per play! Wow!) It’s unavoidable, and manufacturers cannot control how arcades price their games. But, it would be awesome to see games offer lots of gameplay per play, even if the ticket payout isn’t that much! Something super fun and enjoyable, where you don’t even mind how many tickets you win, but want to play again just to play. Space Invaders Frenzy is a great example of this.

Additionally, it would be awesome to have games tied into the internet for a global scoreboard. Imagine being #1 in the WORLD on a certain game – talk about pressure!

Honestly? If our channel goes anywhere, it won’t be far from where we are today. We’ve dedicated ourselves to fun, lighthearted, silly videos where we play games and make everyone laugh, and that’s what we’ll be doing in the future, too! Sure, the channel will grow, but we aren’t stressing or pushing hard to grow faster. Instead, we hope the channel continues to grow naturally as it has been, picking up friends and fans along the way. Statistically, our growth up until now may seem awfully slow for some, but for us, the value is obvious – we’ve made so many friends and met so many amazing fans just staying the course, so why stop? What’s that saying, slow and steady wins the race? Except it’s not a race, it’s just Youtube! We set our goals to be reachable within our limits and as we grow, seek out bigger goals! Currently, our next goal is 10000 subs! Seems almost unreal… but then again, so was 100, 500, 1000, 5000… Truly, we don’t have an end goal in mind for the channel. We have so much fun making videos and sharing them with everyone that we’ll continue to keep it up, 3 times a week, until we eventually can’t anymore. Where the channel goes, nobody knows! But we know it’s gonna be good.