About Speed of Light

Speed of Light is a perennial crowd-pleaser with a large player following and remains a top pick for any entertainment venue.

Rated the #1 game in the U.S. by RePlay Magazine Players’ Choice Poll in 2012, the popularity of Speed of Light has grown considerably since then, generating thousands and thousands of player-posted Youtube videos marking their high scores and challenging their friends.  Celebrities like Justin Bieber and soccer super star Neymar Jr. recently went head-to-head playing Speed of Light, their challenge was posted to Instagram lighting it up with millions of views in just days.

At an impressive 8ft tall, Speed of Light is an instantly recognizable attraction. It has enjoyed much success with well-known restaurant and entertainment chain Dave & Buster’s that they created a Speed of Light App which featured in the “Best New Games” category on Apple’s App Store.  Speed of Light also won a Silver BOSA in 2011 from BMI Gaming / The Stinger Report. 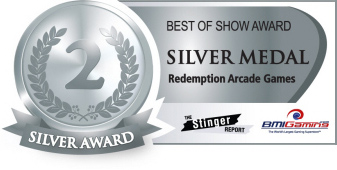 In single player mode guests can try to beat the high score for a big ticket win or they can go head to head and challenge an opponent in the two player mode. Operators have the freedom to choose between various game-play scoring and bonus options that keep guests entertained and coming back for more.

Contact us to get this #1 rated game into your entertainment venue today!

“Speed of Light is a stunner. It thrills players and has tremendous spectator value. Another quality offering from LAI Games.”

“Speed of Light is a winner. It looks great, is liked by all, and has a great ROI. Plus, it’s a great way to work out!”

Speed of Light on Location

If you like Speed of Light, we recommend you also check out these games!