In this Community Spotlight, The Arcade Dad sits down to share how he got his start on YouTube, what inspires him, insights on the arcade community, and his thoughts on the future of the industry. 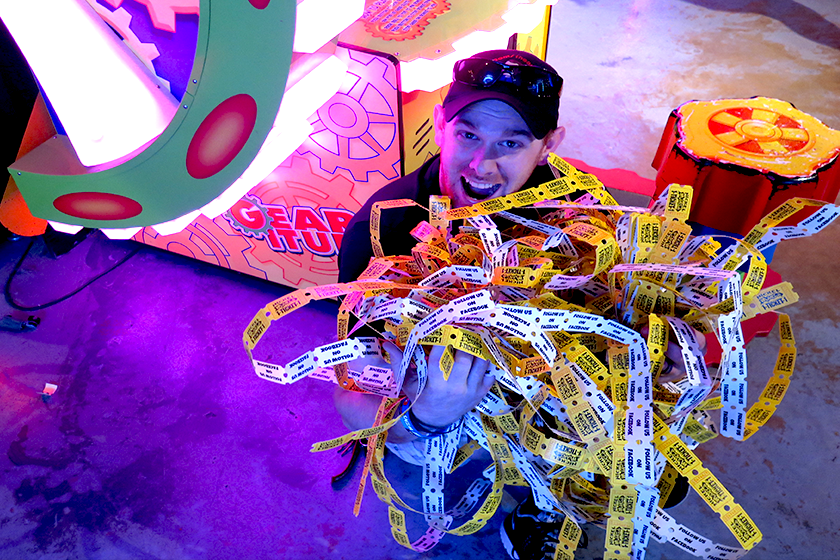 I was born in northern Louisiana and moved to Jacksonville, Florida, when I was 10 where I grew up.

I have many other hobbies besides arcade games. I scuba dive, surf, skate, play drums, bass guitar, and violin believe it or not, hiking, camping, and of course gaming.

I got my first job when I was 14 years old as a bagger at Winn Dixie Marketplace. At the location, there was a claw machine tucked in the corner. I always wanted to jump on it but everyone always told me that it was impossible to win from. I took that as a challenge and after I figured out a strategy to move the plush around a bit to get the grab, I was hooked. I grew up in a family that did not have a lot of money so we could never afford to go to the arcade. So once I started working as a lifeguard at Adventure Landing in Jacksonville. I played in the attached arcade every chance I got. Since then, it has been a dream of mine (though it is a silly one) to own my own claw machine. This has yet to work out though lol. 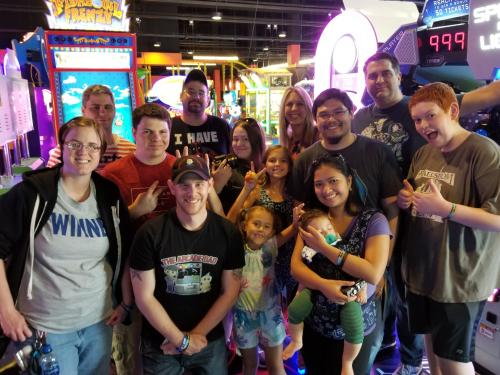 My wife (Jen) is from the Philippines and has never really gone into an arcade. I took her one day since we liked to watch arcade gameplay on YouTube and she saw me getting jackpot after jackpot and claw machine win after win. She suggested to me that we start our own YouTube channel. This was about 4 months after we found out we were going to have our son so we decided to call the channel The Arcade Dad.

It is hard for me to pin down my favorite game since I like to play most of them. I LOVE playing the claw machine since it is where everything started back when I was 14 years old, I love to play Black Hole and Stacker. Jen is slightly obsessed with Color Match and Mega Stacker. If an arcade has any of these machines, this is where you can find us.

Do you have a favorite arcade (or a local arcade you want to give a shout out)?

Oh my god there are several. Stars and Strikes in Hendersonville Tennessee is a small arcade but their staff has been amazing and very friendly, Stars and Strikes in Smyrna Tennessee is a very fun arcade and the company is great, Go USA Fun Park in Murfreesboro Tennessee has been great to us, Big Top Arcade in Pigeon forge has some of the most fun staff we have met, Arcadia in Gatlinburg is just a mind blowing arcade that we LOVE to visit. Finally an arcade we have yet to be able to visit since it is new, Lulu’s Beach Arcade in Myrtle Beach which is managed by Ivan. Ivan has been a big help to us when he was at Big Top and he is an awesome manager.

Yes we watch several others, of course the big names like Arcade Matt, Arcade Warrior, and PTW but a lot of smaller channels as well, all the channels within the “Claw Council” (NolaFam Arcade, Dragon Claw Games, JJGeneral1 Arcade and Drew the Disney Dude) all are awesome family friendly channels, Carson Claws has been a HUGE help to us and is an awesome channel, and of course The Arcade Couple and InfiniteMuah, both great channels with a positive message

I feel that the arcade industry is on a little bit of a bump. Awesome arcades like Round 1 are taking off and spreading like wildfire around the country, which is a good thing. For the longest time, Dave and Busters had the top spot and, really only spot as big arcade chains go, and with Main Event and Round 1 opening new locations, more people will be able to experience different games, different locations, and different atmosphere that can appeal to them. This is bringing more people into the community. I just hope it keeps moving in this direction. More arcades results in more fun lol.

I would like to see more skill-based games. I have seen a huge increase in the number of claw machines and games set on a pay out rate in recent years. This is leading a large part of the population to avoid going to the arcades or playing these machines due to them thinking that games are all “Rigged”.

At this point in time it is hard to say. The Arcade Dad channel is currently experiencing an algorithmic glitch with YouTube. This is causing a lot of issues getting our videos to reach our viewers due to the videos getting falsely “flagged”. What we are doing to combat this is, we will, for the time being, be launching a new channel called TAF Plays. With this channel, Jen and I will both be on camera a lot more bringing the family aspect to the videos, and we will be combining console gaming videos with arcade videos and livestreams on the same channel until YouTube gets the glitch fixed. This will help us target an audience in the gaming community who are more likely to be a part of the arcade community vs. combining the arcade videos with vlogs or other types of videos. Instead of me being the front man all the time, now I will be behind the camera half the time and Jen will take over. It is a very fun project to work on and we are very interested and looking forward to seeing how it pans out.